About 5 million dollars are going back to various governments 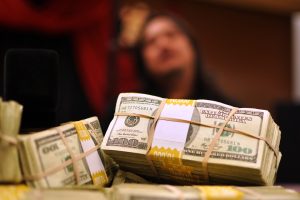 After a one-year hiatus due to the pandemic, the WSOP were back on American soil this fall. However, when you talk about casinos in the United States, you automatically talk about taxes. While gambling winnings are not taxed in Canada, this is not the case in the U.S., even for non-residents.

Each year, American accountant Russ Fox studies how much is actually left in the pockets of WSOP final table players once taxes have been paid. In 2019, an incredible $12M was going back into the various government coffers. What happened this year?

Note that all of these figures do not take into account possible staking agreements between players. For a guide to poker taxation, see this text.

Koray Aldemir, a German pro who resides in Austria for tax reasons, won the world championship title and the $8 million that came with it. He has never been so happy about taking up residence in Austria. Thanks to the tax treaty between the United States and his country of residence, the American tax authorities did not withhold any money. Even better, gambling winnings are not taxable in Austria. In short, he gets to keep every one of his dollars. That’s certainly better than the 46% tax rate he would have had to pay if he had resided in Germany, where he was born.

George Holmes, 2nd, is an American. His taxable income just went up by $4.3M on his 2021 taxes. He will be able to deduct his gambling losses for the year, but in total, he will have to remit about $1.8M to the IRS.

In third place is Jack Oliver. This Manchester, UK resident benefits from both the US-UK tax treaty (gambling winnings are exempt from tax withholdings) and the UK Gambling Act: his winnings are not subject to UK tax. He can keep all of his $3 million in winnings.

Joshua Remitio is also American and suffers a similar fate to Holmes. He will pay about $1M in taxes and keep $1.3M in his pocket.

Ozgur Secilmis, 5th, is a resident of Istanbul, Turkey. The country has an agreement with the United States allowing him to avoid the hand of the American tax authorities. The Turkish government will not do him the same favor. He will have to pay about $700,000 on his $1.8M earnings in his country of residence.

Hye Park is a New Jersey professional. In addition to the federal tax, he will have to pay a hefty state tax. In addition, since he considers poker to be his profession, he will pay his taxes as a self-employed person. He will remit over $650,000 of his $1.4M winnings. With an effective tax rate of 46.45%, he is the one who will remit the largest portion of his winnings to the tax authorities.

Alejandro Lococo of Buenos Aires, Argentina earned $1,225,000 before taxes.  The United States and Argentina do not have a tax treaty. As a result, 30% of his earnings are withheld by the IRS with no possibility of recovering this tax.  He will be able to take a tax credit on his Argentine tax return for the IRS withholdings, which will reduce the tax paid to Argentina to approximately 5% of his earnings ($61,250). In total, he will pay $428,750 in tax. His net earnings are therefore $796,250.

Jareth East, in 8th place, is English like Jack Oliver. He will take advantage of the same favorable situation and keep all of his $1.1M.

Chase Bianchi closes with $1M in earnings. American, he will pay about 37.56% of this amount to the IRS.

In total, it is almost $5M that goes to the government coffers, with almost 75% that amount going to the IRS.

There was no Canadian at the final table. How would a Canadian finalist have been treated however?

Canada has a tax treaty with the U.S., but since gambling winnings are not taxed here, the Canadian winner would not escape the 30% U.S. withholding tax. Is a Canadian’s actual tax automatically 30%? Not quite. In fact, this is the maximum possible tax rate.

This is because the tax treaty between the two countries allows the Canadian to treat this gambling winnings in the same manner as a U.S. resident would. In plain English, this means that the Canadian can file a U.S. tax return to deduct his or her gambling losses from the winnings. Any overpayment of tax is then recouped, up to and including the full amount of tax withheld. The tax rate for a Canadian winner in the United States is variable and depends on the individual, ranging from 0% to 30% (or even more, if the American state like New Jersey or California also takes a percentage of the winnings).

If you have been deducted 30% on a casino or lottery win in the United States, it is virtually certain that some or all of that amount can be recovered. Gamblingtaxes.ca offers a turnkey solution, handling the entire process with the tax authorities on behalf of its clients. Contact us via this form for a free consultation.